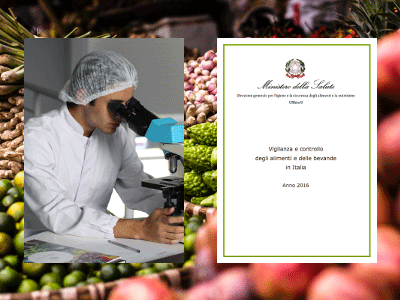 [quote align=”center”] The Supervisory and Control Report of Food and Beverages in Italy describes the results obtained from the supervision and control of food and drink in Italy and is published annually by the Ministry of Health. [/quote]

The Italian Ministry of Health has sent the Supervisory and Control Report on food and drink in Italy to the Chamber and Senate on 2016 data.
The official control of food and beverages is aimed at verifying the conformity of the products with the provisions aimed at preventing risks to public health, protecting the interests of consumers and ensuring the loyalty of the transactions.
The control concerns both Italian products, or of other provenance destined to be marketed in Italy, and those destined to be sent to another State of the European Union or exported to a third country.
They are performed at any stage of production, processing, distribution, warehousing, transportation, trade and administration.
The Laboratories of the official control performed, on 39,944 samples taken, a total of 98,995 analyzes, finding 931 non-conformities, 2% compared to 2015 while the number of samples analyzed decreased. Probably attributable to the greater appropriateness of official control plans in identifying the sectors and matrices that may be most at risk.
A total of 417,496 inspections were carried out.
72.25% of the analysis carried out concerned the search for pathogenic microorganisms and hygiene indicators of the work processing.
Of the total microbiological irregularities, the highest percentage was recorded for Salmonella (33.5%), followed by L. monocytogenes (21, 41%) and E. coli (14.73%), including the E group. coli STEC.
The greatest number of nonconformities appears to be of a microbiological nature, mainly found in meat and milk samples.
To obviate the lack of homogeneity of some data and the lack of uniformity of official controls carried out in the various Regions, also emerged in this last report, from this year inspections and sending of the related results will have to follow the “Guidelines for official controls pursuant to of the EC Regulations 882/04 and 854/04 “(in Italian language) of December 10th, 2016.