The Council of Ministers has definitively approved the legislative decree on controls on organic agricultural and agro-food production, updating the legislation and adapting it to the European provisions with the aim of increasing transparency towards the consumer and guaranteeing those who produce following the rules.
The new standard also confirms the Ministry of Agriculture and Agri-Forestry policies as the competent authority for the organization of controls and delegates these tasks to private and authorized control bodies.
In this productive sector, Italy is a leader in Europe with over 70 thousand operators and an increase in organically cultivated areas of 20% in one year (1.8 million hectares, 14.5% of the total arable land).
It is also interesting to evaluate the out-of-medium growth of some product categories (as per the table – source Sinab) which suggests a differentiation and expansion of the target of consumers of organic products and therefore no longer tied to a niche market. 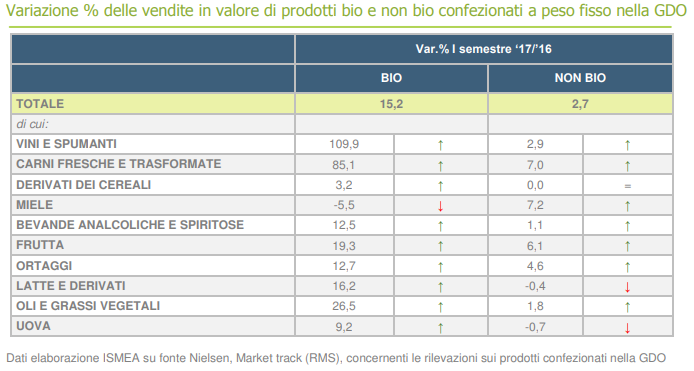 The decree introduces mechanisms to strengthen fair competition and eliminate conflicts of interests of control bodies by establishing that:
– organic operators can not hold company shareholdings of control bodies that exceed half of the share capital of the control body. This requirement does not include associations of a consortium that they are not for profit;
– the control bodies can not carry out activities other than control activity in the organic farming sector;
– the control bodies, their representatives and administrators, as well as the personnel responsible for the control, can not supply goods or services, other than control activity, to the controlled operators;
– the inspector can not carry out the control activity at the same operator for more than three consecutive visits;
– the control bodies must guarantee adequate experience and competence of the human resources employed;
– new obligations for the behavior of the control bodies, which derive from the principles of transparency and correctness and consequent administrative pecuniary sanctions, with deterrent functions.
To protect transparency, the creation of a public database of commercial transactions in the organic sector is envisaged.
In terms of bio, in particular on imports, we also report the publication in the Official Gazette of the D.M. n. 8283 of February, 6th 2018 “Provisions for the implementation of Reg. (CE) n. 1235/2008 laying down rules for the application of Reg. (CE) n. 834/2007 of the Council regarding the regime for the import of organic products from third countries and repealing the Ministerial Decree of August, 9th 2012 no. 18378 “.

This site uses Akismet to reduce spam. Learn how your comment data is processed.

At Almater we are a professional team who work with the up
most ethical respect to bring food innovation and safety to you.